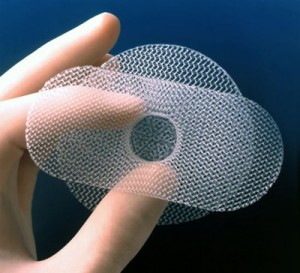 Transvaginal mesh is a net-like implant used to treat stress urinary incontinence and pelvic organ prolapse in women. The product design and implantation technique contributed to serious complications such as erosion and organ perforation.Those who have had complications after having a Transvaginal Mesh may be entitled to financial compensation.

Did you develop Bladder Cancer after taking Actos?

What is Transvaginal Mesh?

Transvaginal mesh (TVM) is a net-like implant usually made of a plastic material called polypropylene. Manufacturers include Boston Scientific, Coloplast, American Medical Systems, C.R. Bard, Ethicon, Cook Medical and Neomedic. The mesh is used for women who undergo surgical treatment for stress urinary incontinence (SUI) and pelvic organ prolapse (POP). Doctors most commonly insert the mesh through the vagina. Unfortunately, in many cases the pelvic mesh has caused mesh erosion and perforation of the organs in women. Other side effects include vaginal epithelium erosion, serious infections, bowel perforation, bladder perforation, return of pelvic organ prolapse, pain and scarring, and urinary incontinence.

“It was simple, it was quick, I went into the hospital the next day I came home and was back up on my feet,” Hanchai said. “It’s a nightmare, I had it put in in 2012, and since then I’ve had 5 to 6 UTIs (urinary tract infections) a year. I literally sat in the bathtub all night long sometimes because it was so painful.” ~ Rita Morrison

“It feels just like a, a screen, you know from a window, that’s on my insides and cutting me from the inside.” ~ Ronda Rayburn

About the Transvaginal Mesh Lawsuit

Transvaginal Mesh has severely affected the intimate lives of many women. The FDA has issued several alerts and the manufacturers are now being sued over the harmful device. The companies that produce the pelvic mesh failed to do proper research and testing before using it on hundreds of thousands of Stress Urinary Incontinence Correction and Pelvic Organ Prolapse surgeries. Due to the lack of warning about the risks and of migration and perforation of the uterus along with several other life threatening complications, thousands of women have filed for transvaginal mesh lawsuits seeking compensation for damages, pain and suffering caused by the pelvic mesh device. Currently 7 manufacturers are set to settle cases worth millions to women adversely affected.