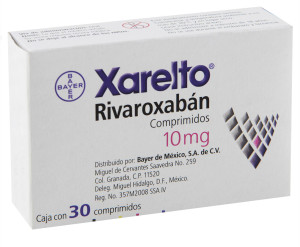 Physicians prescribe Bayer’s blood thinner Xarelto to prevent blood clots and protect from strokes. But the drug may also cause irreversible internal bleeding that can lead to hospitalization and death. Lawsuits filed against Bayer claim the company failed to properly warn consumers about the potential for serious, life-threatening side effects.

Did you develop Internal Bleeding after taking Xarelto?

Rivaroxaban (Xarelto), a Bayer product, has been on the market since 2011 as an oral anticoagulant blood thinner. Xarelto treats a variety of medical issues including: reducing the risk of blood clots and strokes in people with atrial fibrillation, treating deep vein thrombosis and pulmonary embolism, and reducing the risk of blood clots in patients who recently had a hip or knee replacement. Xarelto failed  to warn consumers of its adverse side effects: internal bleeding, blood clots, pulmonary embolism, deep vein thrombosis or even death. Those who have been affected by the following side effects may be entitled to financial compensation.

Xarelto was introduced into the market.

The FDA reports 593 events of bleeding due to Xarelto.

The initial wrongful death lawsuit was filed. Since then, many have come forward resulting in a multi-district (MDL) Xarelto lawsuit.

The number of Xarelto lawsuits more than doubled to a total of 86 pending before US District Judge Eldon E. Fallon.

About the Xarelto Lawsuit

After the link of prolonged use of Actos and Bladder Cancer arose the lawsuits began in 2011. Many patients suffered physically, emotionally and financially due to the negligence of the manufacturers Takeda and Eli Lilly. Terrence Allen went to court in April 2014 after he was diagnosed with bladder cancer in 2011. He had been taking Actos since 2006 to treat his Type 2 diabetes. A jury ultimately awarded Allen and his wife $1.5 million in damages. Allen’s settlement is a good sign for the thousands of Actos cases still awaiting trial, patients who have been impacted deserve compensation from the manufactures.